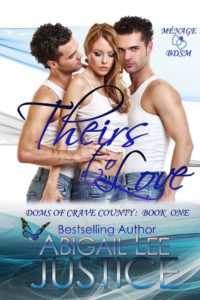 One curvy, redheaded attorney; two sexy twins. Sometimes you must face your demons head on…

Determined to forget a dark secret in her past, Charlotte Maxwell left home when she turned eighteen, immersed herself in textbooks, and eventually launched a successful career as a prominent New York attorney. Isolating herself from family, friends and co-workers, she allows depression, fear, and most of all sexual tension to build up inside her, mind, body, and soul.

Eight years later, she’s forced to return to her hometown of Crave County, where everyone lives some sort of kinky lifestyle, her parents being amongst the many. Tasked with adjudicating her parents’ estate after their unfortunate deaths, Charlotte’s hidden demons begin to resurface and along with her attraction for two of the hottest businessman ever to steam up a room.

Mackenzie and Dillon Ryder were born and raised in Crave County. Practicing what the town preaches has always been a part of who they are. Despite their mutual cravings for the feisty redhead, they have always considered Charlotte Maxwell off limits. These two sexual dominants have been searching for their missing puzzle piece since high school. No submissive has come close to completing their circle, not until Charlotte needs them to rescue her. Not only is she the answer they’ve been looking for, but she too has been secretly pining for them. Will fate bring these three together, or will their insecurities separate them for good. Buy Links: Amazon Kindle Unlimited

For a signed copy from Abigail Lee Justice click on the button below:

Your cart is empty
Visit The Shop